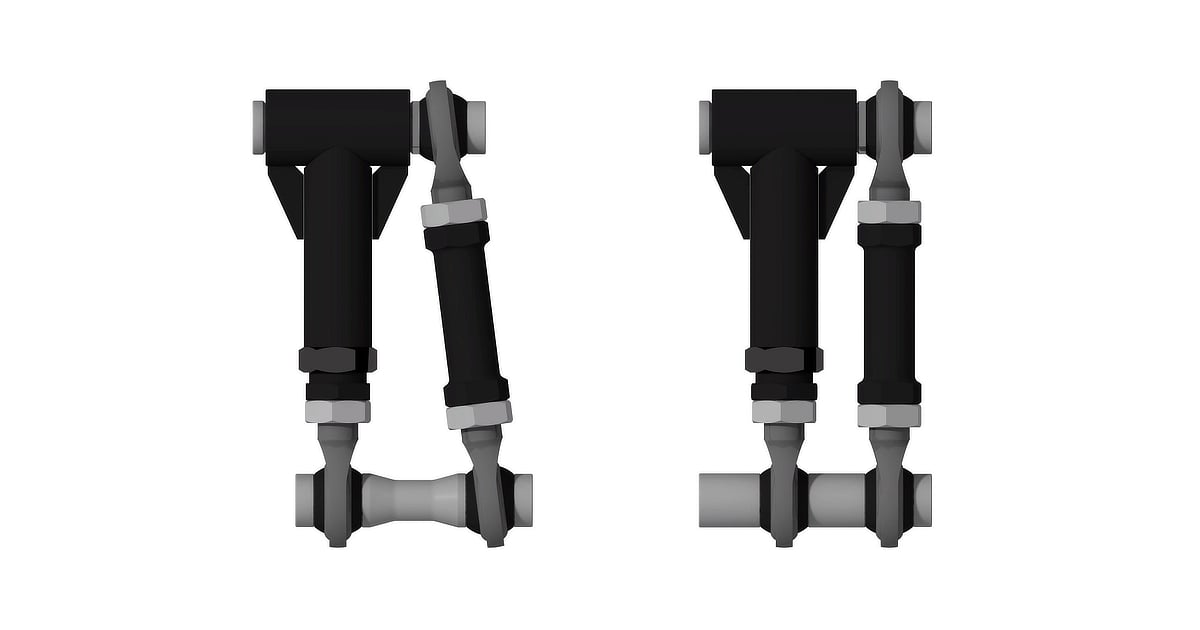 The front upper suspension arm for the Nissan Skyline R32 generation has long been a problem for R32 Skyline owners who need adjustable length arms to adjust front wheel camber angle after having lowered the ride height. The problem is that there were no front upper control arms available that did not loosen, were durable enough or won’t bind the suspension.

Most aftermarket R32 front upper control arms are known to bind. The binding is caused by the articulation of the third element, commonly known as the kingpin or the knuckle extension.

As the suspension is compressed this part rotates and creates deflection in the bushings in the OEM upper arm. This is acceptable with rubber bushings as they typically allow up 7 degrees of axial misalignment between the inner and outer races.

Enthusiasts and racers usually want to upgrade the bushings to stiffer polyurethane bushings for more consistent alignment and improved feedback. This also helps with handling and grip as there is less camber loss under lateral loads. The problem is that the suspension does not move as freely anymore and binding bushings will deteriorate over time. Spherical bearings cannot be used with a single piece on all corners as then the arm will deform if all other bushings are also solid.

To illustrate the problem the front suspension was modeled in 3D. The front upper control arms bolt is concentric in static ride height mode as modeled but as soon as the suspension is compressed there is misalignment and the suspension is binding unless the knuckle side upper arm axis was freed up and a knuckle location defined by one point and one link instead.

GKtech decided to develop its own version of the R32 FUCA (front upper control arms) that would provide sufficient range of adjustment and use all metal bearings with Teflon inserts for longevity and play free operation. As the R32 chassis was very successful on Gr. A racing, its front suspension design was looked into.

The entire front suspension had been redesigned, but it looked like original chassis side suspension pivot points had been kept. The upper suspension arm had been divided into a two piece design consisting of an A arm and a straight link that allows the upright extension assembly to rotate (side view) during suspension heave without binding. The upper arm consists of five bearings, two of which were rod end type.

There does not appear to be much adjustability built into it meaning the camber was adjusted elsewhere such as the lower lateral link. Considering it was designed for racing and all components optimized for racing from the ground up it should not be a problem. The P10 Primera used in the British Touring Car Championship in the same time period also used a similar suspension setup (figure 4)

After the problems of the OEM arm and aftermarket arms were analyzed, group A design studied a concept version was modeled for price quoting and strength analysis.

The first design concept featured a triangulated A-arm with three spherical bearings. The knuckle side was actually a 3 piece rod as provided a very strong design. Double adjuster mechanism was originally not used.

The side link consisted of a turnbuckle with left hand and right hand threads on end, two rod ends and jam nuts.

The next design stage featured pinch bolt type locking of the threaded components as this design is easy to adjust on the car and does not require too many tools for the job. This required more machining and can get stuck if over tightened.

Double adjuster feature was added to the A-arm side and 3-piece rod end replaced with a 2-piece for simplification purpose. The welded assembly was also now more symmetrical for the future option of making it fit on Z32 chassis. Offset spacers were also designed for the rod ends and spherical bearings.

The following problems became apparent with the first prototype:

The second design update did away with pinch bolt fittings as there was too little room inside the knuckle extension for fully turning the turnbuckle. The spacing between two wheel side rod ends could have been reduce, but this would have shortened the arm’s length that resists turning of the knuckle extension.  The welded assembly was updated to be fully symmetrical.

The downside of jam nut design is that many tools are required for adjusting, but upside is that there is enough clearance for adjusting the length on the car and range of adjustability was extended on the A-arm side.

While majority of the problems were done away with the second prototype, the binding of the spherical bearings within the welded A-arm assembly remained an issue. It was caused by torqueing the bolt down and the bearings not having enough of an axial load rating.

The issue was solved by placing an offset spacer between the two bearings as increasing bearing size would have caused problems with chassis mounting clearance.

Since all the functional problems were solved as first party testing provided most information. Testing was performed at Owara Circuit in Japan, which is a very rough course but the upper control arm or other GKtech products didn’t show any signs of wear and tear.

The production version was finalized with the following modifications:

It is also possible to fit the GKtech R32 Front upper control arm on Z32 chassis too by replacing the knuckle side offset spacers with ones suitable for Z32.  The difference between R32 and Z32 version is that the R32 is offset from chassis side mounting and Z32 is parallel is parallel.

It is recommended to use the extended version of the FUCA since the OEM arm is relatively short and under a steep angle creating an excessive camber gain that can be reduced by extending the arm. Lengthening the arm should also raise roll center height as front view swing axis is extended. This means that the lower arm also has to be extended for correct wheel alignment. This will aid with tyre clearance from the tension rod and chassis. R32 chassis can use S13 aftermarket lower arms for non-GTR versions.

GT-R and other GTS-4 versions have drive shafts in the front and as such must use either longer axles or axle spacers to compensate for longer suspension control arms. Care must be taken when adjusting camber from the upper control as not to stretch the drive shafts too much or damage to them will occur.

In conclusion the product ended up meeting all original criteria and even exceeding them as with a simple spacer change they could also be installed on the Z32 chassis. The finished products are also shipped with rubber boots to protect the rod ends from the environment. The spherical bearings inside the welded assembly do not have rubber seals, but as they are rather contained by the chassis mounting bracket it should not be a problem. We also recommend spraying rod ends and spherical bearings with motorcycle chain oil as it forms a wax coating to prevent the debris getting inside.