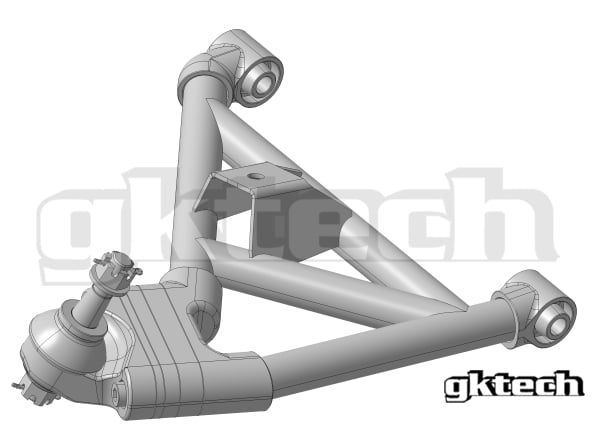 Rear lower control arms are usually the last suspension arm to be replaced on the Nissan S and R chassis when modified as they are seen as a means to only make rear track width adjustable. They are actually a very useful modification, especially with spherical bearings on the chassis mounting side as this eliminates factory designed elasto kinematics

The rubber bushings in the OEM arm play a vital part in the multilink suspension’s original elastokinematics that was designed to toe-in during all load cases. This is good for stability but at loads on cars equipped with high grip tyres and stiffer springs the movement causes understeer and toe change is not considered a good thing on competition cars.

While this design does present a good case for a road car design, compliance is never wanted for a pure track car as it can be sloppy and suspension tuning is not accurate. It is one of the main reasons why the cars feel more predictable and stable when the lower control arm bushings are replaced with polyurethane ones or spherical bearings. Static toe-in has to be increased for same amount of performance. Compliance toe-in allows for less aggressive toe settings for tyre longevity which is ideal for road cars.

To help combat compliance toe in and increase range of adjustability a new lower control arm was to be developed at GKtech.

The first version GKtech lower control arm’s development was outsourced and featured many new solutions that have not been available before.

The chassis side bushings were replaced with spherical bearings with neoprene dust covers for longevity. They were housed inside forged steel tube ends. The middle part is tubular steel and gives a good increase in strength over stamped sheet metal. The anti-roll bar bracket is sheet metal with single mounting point.

A special feature was the ability to change track width with stackable spacer between the arm’s body and outer ball joint housing. This allowed track to be changed ±15mm. Narrower than OEM arm length may be required for tyre clearance from the bodywork, however for racing it is best to use longest available length for less weight transfer giving a more stable platform.

The wheel side ball joint housing was also forged as was the part that was welded to the tubular section. The spherical bearing was fully sealed from environment and longer shank was originally available for roll center correction.

The longer shank was later discontinued because it also quickened camber gain and increased bump-steer.

The design also had a few problems, which is why it was discontinued and redesigned.

The main issue was its weight. The full assembly weighed 5,1 kg per side which is as much as the OEM rear upright. Unsprung weight must be kept to a safe minimum for best damper performance. The wheels will follow the contours of the road much better if they have less inertia to resist movement.

It was also expensive to produce because it had four forged steel pieces. The individual parts count was nearly 40 different items, where in comparison the OEM arm consists of 17 components in total.

As this product was not performing as hoped on the market it was time to redesign it with a smaller weight in mind while still retaining good wheel and tyre clearance.

The V2 GKtech rear lower control had many design changes targeted. The whole product was to be lighter, retain the adjustability and clearance from wheel and tyre. This time it would be designed in house to have full control over the design. It also had to retain the feature of being adjustable parallel to the chassis which was one of its main features. Many aftermarket S chassis rear lower control arms move the wheel forwards or backwards when adjusting its length.

The new version only carried over a few parts from the V1 which were the standard length version ball joint shank, high misalignment spherical bearing and its hardware.

The first new version was based on the geometry of the original product. The chassis side spherical bearings were replaced with rod ends that would be used for adjusting the track width, however many other solutions were also considered:

The design that won was the best all things considered. It was of the lightest and simplest construction. The strength was considered to be one of the best of what was possible. The best solution would be a fixed version, but as one size fits for all does not apply here it could not be done. Bolt on ball joint housing added too much complexity and weight.

The first new RLCA was designed as to utilize the same exact geometry as the V1.

The first concept (Figure 5) was drawn up on the idea of keeping it as simple as possible.

As design work progressed the front tube had to be bent to clear 16” wheels and larger wheels with high offset (high positive values). High misalignment spacers were also designed to make sure there is enough range for motion.

The first prototype version worked well with the first generation Nissan multilink rear suspension where the lower arm mounting is at a relatively high angle such as the S13, R32 and Z32. The next generation featured drastically lowered anti-squat which meant that the along with other pivot points, the front lower arm point was lowered a lot since it has the most effect on anti-squat.

This meant that the anti-roll bar mounting was quite high up relative to the suspension arm leaving clearance from the bracket on the arm itself.

The anti-roll bar bracket also had a bend added close to the front tube end to triangulate it for more strength.

The second prototype was fitted and fitment was greatly improved for the anti-roll bar end link. A feature that was removed is the bottom cap for the ball joint housing as it reduced clearance from the brake rotor.

The front rod end thread enclosing caps were removed during the second prototype stage as they interfered with wide high offset larger diameter wheels and tyres. The tube end was also cut shorter in length. This also removed the idea of adding double adjuster mechanism so the arm would not have be removed from the subframe as it would have reduced tyre clearance.

The final version of the V2 GKtech rear lower control was further optimized for less weight and more strength and since them the design has not been updated as there has not been any negative feedback. The V2 lower control arm assembly weighs 2kg less than V1 whilst still retaining strength, good tyre clearance and plenty of adjustability. The adjustable motion ratio was originally added for end link clearance and fitment but is also a beneficial tool for tuning chassis balance.

Originally the S14 version of the arm featured wider rod end spacers than the s13 but latest production feature uses S13 spacers as standard and custom thickness and diameter washers added to be used on S14 as it is the only difference.

All the components in the V2 arm’s body are from high strength CrMo steel that are CNC machined for accuracy and repeatability.  They are hand TIG welded together on a custom jig that makes sure the rod end housings/ tube ends are parallel to each other as if they were not, the arm could not be installed into the subframe when the rod end offset has been adjusted.

The jig features the ability to turn the arm upside down without removing it from the jig to reduce risk of tube ends not being parallel after welding.

After welding the welded assembly is covered in black electrophoresis coating for resistance against corrosion. Then the bearings are added along with the rest of the hardware. The parts also quality checked and test assembled before shipping.

In conclusion the V2 supersedes the V1 in every way but ease of adjustability. Adjustability was always going to be a compromise with a single piece design. Bearing life can be extended by periodically spraying them with motorcycle chain lubricant as they form a wax coating that keeps debris out.

The reduced unsprung mass will be noticeable. This product was in development stage for about a year when final production model was released and will continue to be improved upon if better solutions come up.

Further more we were able to create these to be compatible with the below;