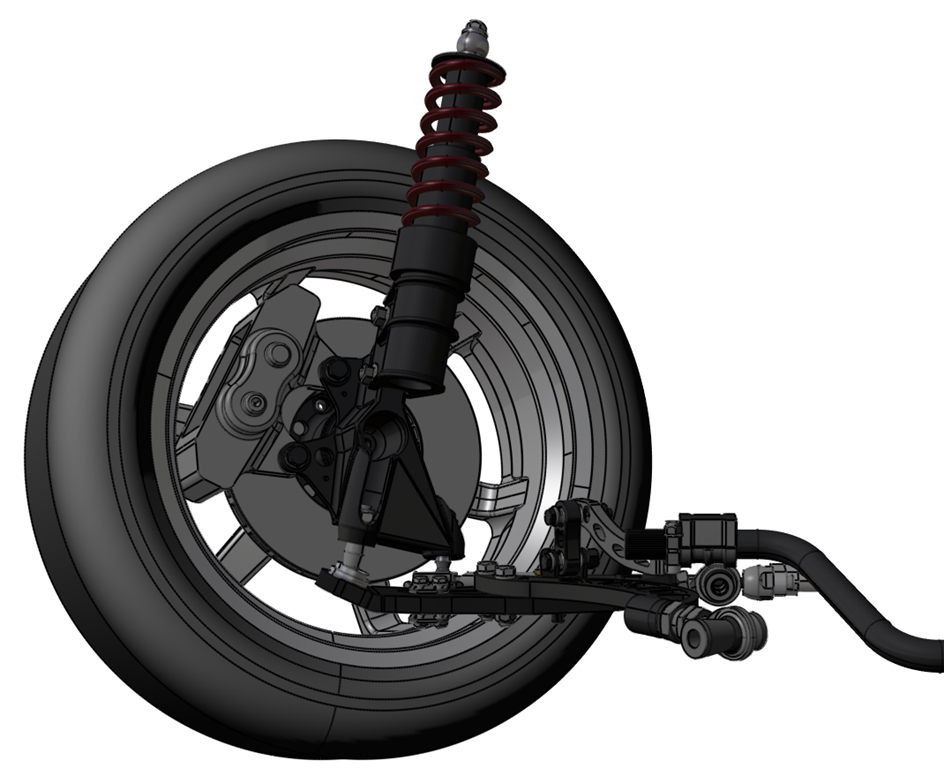 Competition drift cars have their steering systems modified to maximize the steering angle for more performance and show. This is done by relocating the steering rack or using offset rack spacers to avoid binding and short steering arms are used on the knuckles for more angle. The lower control arm assembly is also swapped out for ones that have more tyre and outer tie rod clearance.

Anti-roll bars are often removed as they do not have enough wheel and tyre clearance.

The OEM type anti-roll bars on the S-chassis limit the maximum steering angle to around 45° (image 2). It can be improved upon by extending the lower control arm and using lower offset wheels, wheel spacers and using minimal negative camber. The suspension assembly in image 2 features 20mm extended LCA. These modifications can’t be done indefinitely as suspension parameters will be poor. The scrub radius will suffer most with offsetting the wheel more outboard. Lengthening the lower control arm is a good solution as this reduces steepness of the roll center curve and will improve its height slightly. Wider track width will also increase maximum grip and turn in response.

If maximum steering angle is desired with minimal compromises then the tension rod and anti-roll bar clearance must be improved. Tension rod clearance can be improved by using aftermarket tension rods that are mounted offset on the chassis and feature a curved body instead of a straight tube.

Anti-roll bar clearance is more difficult as the choice of bars that have sufficient tyre clearance is miniscule. At the time of the development process there was only one good product available.

It was decided to produce one at GKtech to match the rest of our front suspension without compromise and uncertainty.

The goals for the new high-clearance front anti-roll bar were the following:

The diameter of the anti-roll bar plays a vital role in the balance of the car’s chassis. The anti-roll bar reduces body roll of a car by connecting left and right side wheels. As the car rolls into a corner due to centrifugal force reacting the center of gravity, the anti-roll bar resists roll by adding its stiffness and that of the inside wheel’s spring to the equation. It is essentially a transverse torsion spring and like any spring it has stiffness rate. It is carefully chosen to optimize weight transfer during cornering. As both wheels are compressed during cornering the car stays more level. It also allows use of softer springs for better ride comfort and grip. Body-roll needs to be limited for sharper handling and less roll-center migration (change in height), which is not favorable with a MacPherson strut type suspension. The less it changes the more consistent the behavior of the car will be.

The diameter of the front anti-roll bar was carefully calculated. The target was 55% front weight transfer bias during steady state cornering with body roll limited to 2° at 1,2G lateral acceleration. The front spring rate was chosen as 8 kg/mm and rear 6 kg/mm as these are the most popular rates on the S-chassis. OEM motion ratios were used and roll center values were above ground height.

This resulted in a suitable tube size of 27×4 mm and 25.5 mm for a bar. The tubular design has a significant weight advantage by being 1.8 Kg lighter in 3 piece configuration compared to a full bar.

It was decided to go with a splined racing style anti-roll bar with machined end links as the minimum radius for bending the tube is two times its diameter and would not provide maximum clearance possible without offset the mounting brackets lower and closer together.

The OEM anti-roll bars (S13, S14) were measured using the FARO gage coordinate measuring machine as this allowed quick and accurate CAD modeling of the anti-roll bars. The two differ from each other via mounting points on the suspension arms. S14 version is closer to the front of the car and has longer levers making it incompatible with the S13 chassis.

The first problem encountered with the new anti-roll bar was that we were not able to bend the material without deformations and forced the use of a solid bar, which is smaller in diameter than the hollow tube, but almost twice the weight. The material chosen for the bar is 50CrV4 which is classified as spring steel due to its yield strength being very close to its ultimate tensile strength.

The lever arms were designed straight with the spline cut under an angle as this allowed for that flat and straight design that is the lightest and strongest option. The levers were pocketed hollow in the middle to reduce weight. The arms would be secured with bolts running through the arms vertically in a common pinch-bolt type fashion.

The topology of the levers was optimised using finite element method via enforced displacement, based on suspension compression calculation during cornering. The stress in the material is displayed via a colour chart, the warmer the colour the higher the stress. This allowed accurate design of the geometry without any stress risers that would result in material failure due to fatigue.

New polyurethane bushings were designed for the S13 and S14 chassis to match the larger diameter anti-roll bar. They feature grooves on the inside for better lubrication to provide a noise free operation.

The first prototype was manufactured with fitment for S13. The roll bar fitted on the car ideally as it is a simple shape to reproduce.

The levers for the bar were however difficult to install due to the spline being angled. It also did not have as much tyre clearance as desired and it also made contact with surrounding components and the chassis during bump. A redesign of the end lever was required.

The end levers were redesigned for the second prototype and additional chassis clearance solutions were considered. One of the ideas was to use spacers to mount the anti-roll bar lower. Offset versions were also considered as they allowed for a narrower anti-roll bar but this would have reduced the effectiveness of the bar as the mounting would not be as rigid. These were eventually not used as they added complexity to the assembly and reduced lower control arm clearance.

Ultimately the end links were developed with a curve in the middle to clear the chassis.

The shape of the end links was based on maximum tyre clearance and structural stress, which was optimised to be as evenly spread across the part as possible.

The clearance of the anti-roll bar end lever was tested with a 3D printed version. This allowed real life testing to be performed quickly and affordably.

After test fitting, the part was optimised using finite element method. The weight of the unsprung mass must be kept to allow the suspension to react faster with less inertia.

The third and final prototype version featured bent steel end levers and fit on the cars perfectly. The length of the bar was reduced 10mm per side to protrude less to wheel well. The thickness of the levers was increased by 2mm and hardware was also sized up by one step as the leverage on the pinch bolt system was reduced to increase clearance from the tension rod brackets.

This version was also test fitted on cars with 2JZ, LS2 and RB engine swaps and there was ample clearance from all of the oil pans.

The production version of the high-clearance S-chassis front anti-roll bar has the following features and benefits:

*Will NOT work with Whiteline end links

*Will not fit with bolt-on tension rod braces

This product has worked great ever since it went on sale and no changes have been made to it. In the future hollow design might be looked into but currently this design works well.

In conclusion this project was in development for a long time and its success has proven the effort was well placed. The final result works ideally and is very easy to install.  The OEM anti-roll bar is to be removed with its bushings and GKtech put in its place.

The stiffness of the bar can be increased by using the most roll bar side hole and stiffened by using the rear. This changes force applied to the bar. Center hole is used as the default setting.

The weight difference between the OEM s13 anti-roll bar and GKtech 3-piece is 0,4kg with OEM being lighter due to being smaller diameter. EU spec S13 bar was used for referencing.

It is recommended to use aftermarket end links in performance applications as the OEM end links are designed with vibration and noise cancelling features in mind. These features reduced effective rate of the anti-roll bar and yield in a more progressive rate, increasing roll and delaying weight transfer. End links with polyurethane bushings will perform better then soft OEM bushings, but it is preferred to use ones with spherical bearings/rod ends.